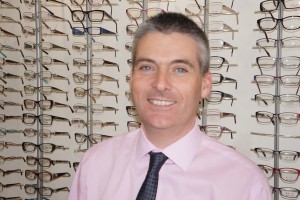 This autumn marks 40 years since the practice was established in Walton-on-Thames. Barry Covill Opticians began its life in the former Unigate dairy shop at 57 High Street. Barry Covill (Optometrist) opened with Nina Edge-Morgan (Optician), now sadly deceased, and Teresa Wilkins (receptionist) and it was opened to offer high quality and fashion eyewear with a very personalised service. It soon became the Optician of choice in town which was served by three other independent practices well established at the time namely Robert Frith, Wilson’s and Alfred Hawes now no longer in existence.

The 1980s saw the establishment of Optical Chains and Specsavers and Boots were one of the first to establish. This saw a change to traditional family practices being highly commercial and value lead. Along with deregulation at that time, which meant non-registered opticians or optical assistants were allowed to operate, it meant that independent practices like ourselves had to offer exceptional service, quality and professionalism to survive. And I’m glad to say that that is exactly what we did and continue to do. The optical market was saturated with cut price offers but this did not stop our practice growing.

I joined the practice as a Saturday boy whilst I was undergoing training to be a Registered Dispensing Optician in 1986. I was put on reception to increase my interpersonal skills being a rather shy 20-year-old. This stood me in good stead when, on qualifying in 1988, I was appointed Manager, replacing Graham Johnson who has only just retired recently from his own practice in Hersham.

Looking back, my youth and inexperience altered the client base, but I soon built up my own loyal following many of whom still see me today. As the practice grew, we took on a second optician Tony to assist me and many of my colleagues stayed for ten years or more such was the team spirit of the practice. My first receptionist Val, followed by Jacqui and Elizabeth are all firm friends though now but all retired.

Barry Covill moved the practice to its current location at Number One Church Street in 1996 and retired in April 2002.

EYEWORKS was established as the youthful Mehul and Dharati Doshi took ownership and invested heavily to modernise the business. A state-of-the-art Consulting Room was fitted immediately, and the practice was computerised, but the ethos of the practice was left untouched as it was a winning formula.
Gone were the handwritten orders for spectacles and in came on-line ordering which significantly speeded up the supply of new spectacles. Given that I and my team were not IT savvy at all, this was a significant and somewhat frustrating challenge for the team.

New technology now in use at the practice is impressive. We can view a 3D image of the back of the eye to detect pathology sooner. The plethora of ophthalmic lenses compared to the 1980s is impressive to meet the visual demands of the digital age. We can even individually design spectacle lenses that meet your needs. That being said it is obvious on entering the practice that we have lost none of our interpersonal skills despite a move to more internet shopping in general. We genuinely are people’s people and take great interest in our clients. Stories and laughter prevail every single day and that sets us apart from others.

This year has presented the biggest health challenge in our 40-year history forcing the practice to suspend routine eye examinations from April to June. As we were sent home to stay safe, Mehul Doshi kept open throughout for emergencies, repairs and replacements and many clients were most grateful for their home deliveries.

Looking forward, there will be many challenges and changes ahead but I sincerely hope the spirit of the practice remains the same and it continues to thrive in Walton for the people for whom it serves.

Here’s to the next 40 years and with a bit of luck I may be asked to write more memoirs in my dotage.

Fields with a * are required

“Very friendly and it is nice to see the same faces over years and not months.” Miss S Prickett